So, there’s this baking competition coming up – my work’s annual Valentine’s Day Bake-Off.  Last year, I entered 2 of the 4 categories and won both, which was both super exciting and super surprising.  Check out that post here.  This, however, has added EXTRA pressure for this year’s competition.  Therefore, I’m on a mission to bake my way to success.  The current mission is a red-velvet infused frenzy.

Last week, I made my first red velvet recipe, recommended to me by Sally of Sally’s Baking Addiction.  Sally rarely leads me wrong, and this recipe was no exception.  Now, this recipe is not an SBA original, but, it is most definitely worthy of her praise and your tasting pleasure.  These bites are so full of different flavors and textures they are absolutely irresistible.  They begin with a red velvet cookie layer, topped with coconut, sweetened condensed milk, THREE kinds of chocolate chips (milk, white, and semi-sweet) and finished with pecans.

Now, coconut and I have an on-again, off-again relationship (Malibu is a permanent no-no in Stephanie’s drink orders).  But, when it comes to coconut and chocolate together, there is no gray area.  I love it.  My first encounter with a coconut chocolate combo was Keebler’s Chips Deluxe cookie with coconut.  Have you tried it?  If not, I seriously recommend these…you know, when you are too lazy to make your own, or simply because they are delicious and nostalgic (for me, at least).  I grew up sneaking these from the top of the fridge where my mother thought she so cleverly hid them.  The coconut adds an awesome chewiness to this bar, and, combined with the chocolate, creates a rich, sweet topping.  The pecans give it a nice nuttiness and crunch, while the sweetened condensed milk binds everything together, making for one mouthwatering dessert.

I don’t have anything negative to say about the final product of this dessert – it was delicious.  The process though? I had a couple setbacks.  Mainly, the cookie dough layer got me all frazzled.  First, it is just like cookie dough, meaning it is the same consistency and does not easily pour.  (And by, not easily, I mean, not at all…whoops)  To that end, I would definitely nix lining the pan with aluminum foil before pouring in the dough next time.  While this theoretically makes it easier to get out of the pan after baking, I didn’t find this recipe difficult to remove either way (just spray with baking spray).  The aluminum foil did, however, make it very difficult for me to spread the dough.  Every which way I tried to pull or push the dough with my spatula, the whole foil just moved off the pan walls with me.  This probably took a good 15 minutes and I was sooo tired of pushing the dough around by the time I finally got it an acceptable spread amount!  You can still use the foil if you want – but you’ve been warned!

My other setback was just knowing when the bars were done!  The toothpick method is tricky here, because you have melted chocolate on top of the cookie layer, so of course it’s going to come out covered in stuffs!  You just kinda gotta trust your gut I suppose.  Plus, it’s cookie, so a little under-baked is never a bad thing.  I stuck pretty strictly to the suggested time and it worked for me.

I took these to work and they were a huge hit.  I would definitely dress these up a little more Valentine-ish if I choose this recipe, but, it is definitely a strong contender!

I also learned my lesson with this recipe:  I made the mistake of not taking pictures of my baked goods right away.  Usually I do this right after my #1 taste-tester (my boyfriend) gives me his review.  I did not do this right away, however, and instead took a bunch to work first and then a day later remembered I hadn’t taken any pics.  HUGE MISTAKE!  This little guy is the only one that was left when I remembered… 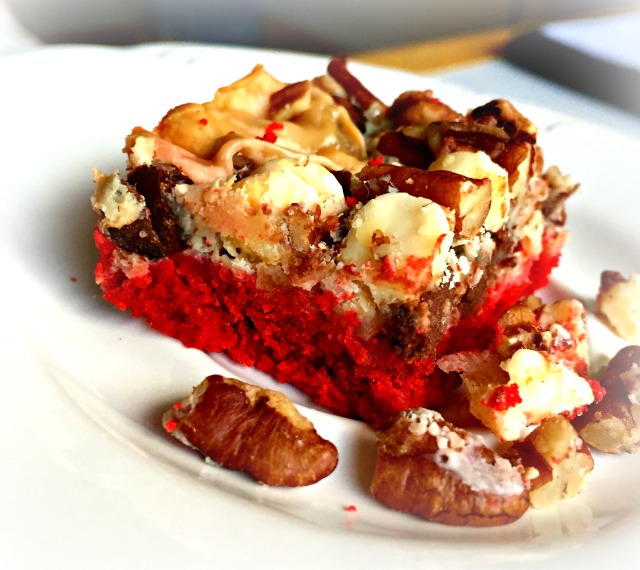 I think my boyfriend left it for me because he felt bad for devouring them all…either that or he hit his sweets quota for the day (I’m not sure I’ve ever known him to have such a limit though…)  Anyway, they were DA BOMB.  Go make them please.  🙂  I’ll leave you with a final picture of Daisy trying to get her paws on the last bite…(This was totally unplanned…I was taking pictures of my one remaining piece when Daisy came over to investigate…It was too perfect.)

Check out the recipe below, and visit Sally’s Baking Addiction for more details on the cookbook this delicious recipe came from!

Leftovers can be stored in an airtight container at room temperature or in the refrigerator for up to 5 days (if they last that long).