I’d like to put a disclaimer that I have been in Oregon for my cousin’s wedding the second half of this week, and sick the first half, so my blog did not get new posts. It is now Sunday, and I am still sick – probably sicker than I started – and in the airport in Portland waiting to return to the east coast. Sorry for the delay. Boo. Now to the post…

About 2 weeks ago, my coworker brought me a 10lb bag of baking apples with the condition that I make lots of appley things with them. I did not want to disappoint. Now, first of all, I didn’t even know there was such a thing as baking apples. I guess the reason they are called baking apples is because they are a softer apple, which is nice. I forget the actual name of the apple, though, which is unfortunate. It makes it easier to cook them to mush for applesauce, and takes less time to soften them to the desired consistency in general for any recipe. So, when I received my 10lb bag, I went to work scouring Pinterest for the right recipe. I came across many delicious ones, but in the end, narrowed it down to 3. The first? Apple Strudel Rolls! The second? Apple Crumble! The third? Slow-Cooker Applesauce! Yes, I was a busy girl last weekend with all my apple baking adventures.

All three of these recipes are super delicious and super easy. I made all three in one Sunday afternoon, and still managed to do a lot of cleaning and couch potatoing and Daisy snuggling/wrestling. I think I will break up the recipes into three posts, so as to not overwhelm and to keep each post a manageable length.

These were delicious and easy and I love them. They were like little cinnamon rolls, only appley and less sugar! Much healthier, I am sure! 😉 And the raisins and pecans and apples and cinnamon and spices all came together so nicely to make this delicious little morsel of delight. Now, I did stray from my usual completely from scratch recipes for this one – it uses refrigerated pre-prepared pizza dough. I was going to make my own dough, but just decided to stick strictly to the recipe, since it was so easy and I was tackling several recipes that day (and a headache from a little too much wine the night before)…If you want to make your own dough, go for it. It is super fun! I have a recipe I used here in my Pesto Swirl Rolls that is great. 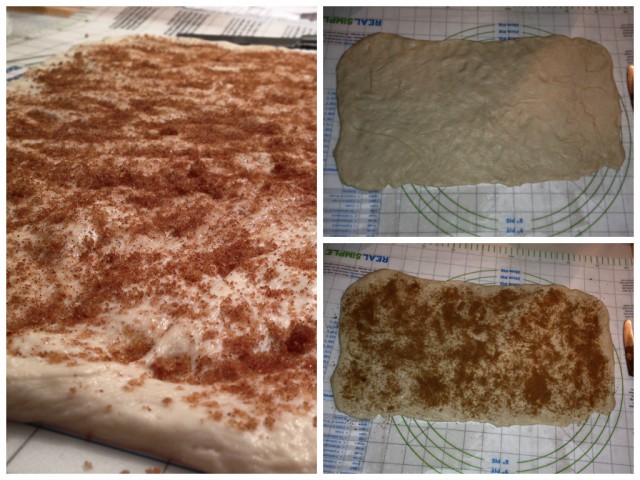 I will give slightly more details in my directions than the original recipe gave. It left a lot of wiggle-room in the methods and, while that is okay, I prefer to be told exactly what should be done and then change things if I want; I do not prefer having to assume things in recipes from the get-go. Especially a new recipe!

The other thing I love about this recipe is that it doesn’t require peeling the apples. For some reason, peeling, chopping, dicing, washing, and other food-prepping tasks really rub me the wrong way. I hate doing them. Lucky for this recipe, I only have to chop and dice the apples. And by “I”, I mean I got my wonderful boyfriend to chop and dice the apples for me! He’s such a good little sous-chef helper when he wants to be. 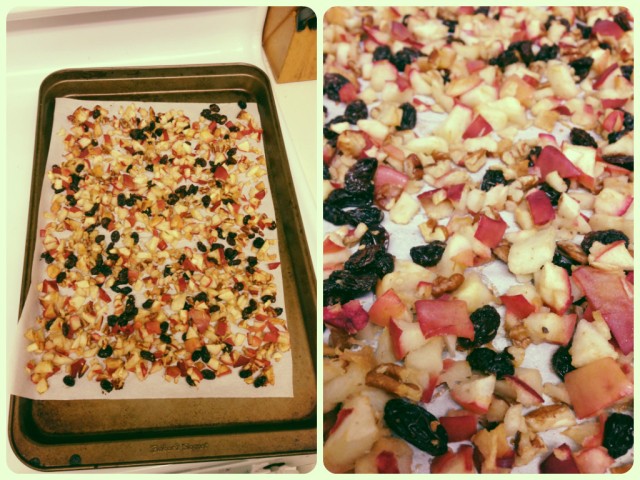 Once the apples are chopped, the rest is a breeze. Add the pecans, raisins, and brown sugar, and pop them in your preheated oven for about 10 minutes. The original recipe didn’t give a time, but I left mine for 10 minutes and they were plenty soft. I probably could have done less too. But if you’re not using super-soft baking apples like I did, 10 minutes is probs perfect.

If you use pre-made dough, all you have to do after the apples are baked is roll out the dough, sprinkle some of the sugar, and then add in the apple mixture. The original recipe didn’t call for this, but I saved some of the sugar mixture to sprinkle on the outside of the rolls. I just took the remainder of the sugar and spice mixture, sprinkled it on my mat, and rolled my finished apple strudel roll around in t to coat the outside. Looked and tasted delightful. 🙂

Sidenote: I accidentally used pumpkin pie spice instead of apple pie spice. But they are close in the spices that they are made up of, and I was confident that it would still taste right even thought I was using the pumpkin pie spice. I guess I just had a brain fart at the grocery store and forgot I was working with apples, not pumpkins. Hehe. Well, at least I’m prepared for all the pumpkin treats in my future!
These were so good that Christian forbade me from taking any to work! I didn’t complain; I ate my fair share too!

Recipe from Will Cook For Smiles

One thought on “Apple Strudel Rolls”