Yesterday, I went on a run that I swear was uphill the entire way.  As I huffed and puffed my way up the giant mountain the last 1/4 mile, I kept saying to myself, “There’s a brownie waiting for you at the top.  That’s why you are running – so you can eat that brownie later.  It’s gonna taste so good…”  And it was.  So good.  These brownies were super decadent, rich, moist, and chewy.  They were everything I could want in a brownie.  But I still have a bone to pick with this recipe.  Flash back to high school… 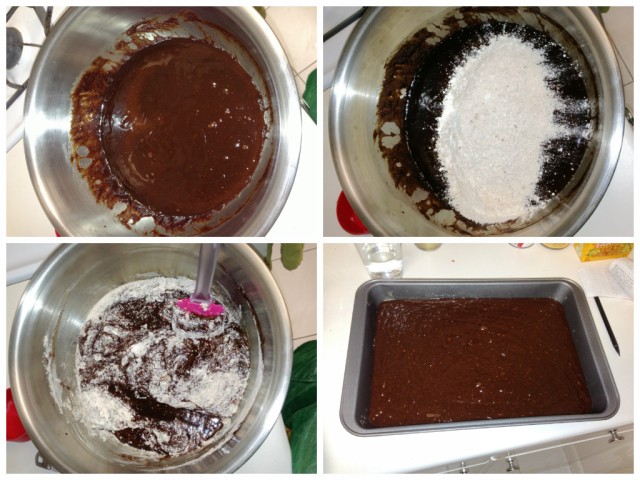 If any of you know my baking origins, have read my bio, or had the misfortune of witnessing (or tasting) my baking attempts in high school, you will know that even a simple boxed brownie mix was a task too daunting for this girl.  They always ended up burned.  Which is sad.  So, flash forward to about two years ago, after I had discovered I actually CAN bake, and decided it was time to tackle the devilishly delicious dessert that caused me the most trouble in my younger years:  the brownie.  But, after I had conquered many far more baffling baked goods, did you think I was about to use a boxed brownie mix?!?!  Heck no!  So, I scoured the internet for the most delicious, chewy, gooey brownie recipe I could find.  Alas, it was delicious, but not nearly as gooey as I liked, and definitely not worth the extra effort of making it from scratch versus an easy boxed brownie mix.  Since that first from-scratch brownie attempt, I have tried many recipes across the internet, searching, searching for one worthy of the extra effort of melting the chocolate, mixing, whisking, and overall just making deliciousness from scratch.  Each recipe brought me a little closer, but none matched up to good ol’ Betty Crocker.

This one hits the mark. 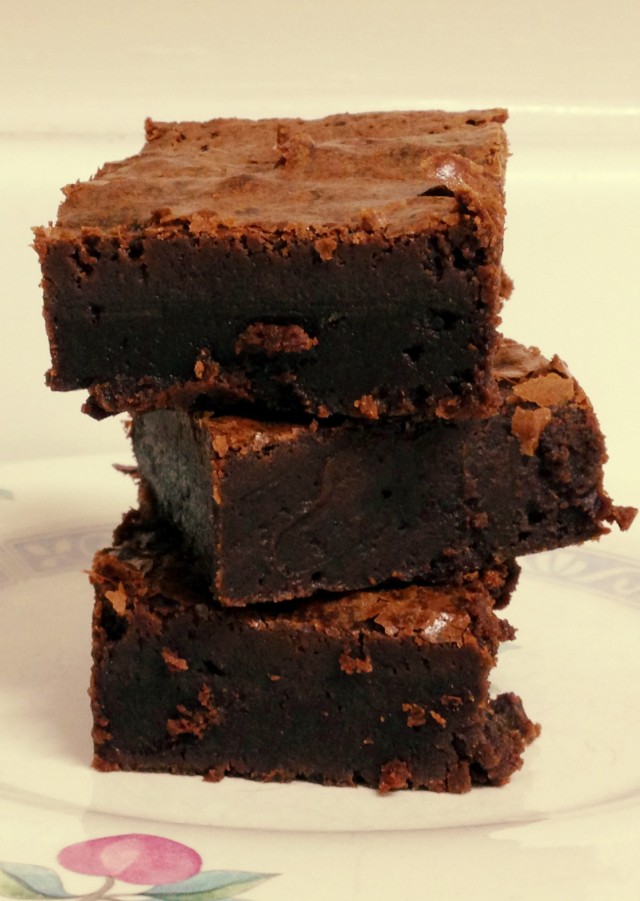 These brownies are delicious.  I am, without a doubt, my toughest critic; but these are goooood.  And the morning after I made them, I woke up to find FOUR LESS than the night before, so clearly my boyfriend enjoyed them.  Now, would I say they are better than a boxed brownie mix?  I am honestly not sure.  They are definitely as good as a boxed mix.  I still feel like there is this almost floraly, fruity taste in them, which might slightly set them apart from that completely pure and rich chocolate flavor I long for.  I love brownies.  All things chocolate win my heart.  And these are at the top of my list for homemade brownie recipes.  I think these may be able to pull ahead of the boxed mix if I had cooked them a few minutes longer (I think I was scarred as a child from all my burnt brownies and am, to this day, terrified of overcooking them).  Are they worth the extra effort?  They are definitely scrumptious enough for me to want to make this recipe again to find out….

Conclusion:  THESE WERE DECADENT.  Go make them and let me know what you think!

So, without further ado, here is the recipe, adapted from the cookbook “Baked: New Frontiers in Baking”.

(Thanks to Brown Eyed Baker for the recipe!)

1. Preheat the oven to 350 degrees F.  Butter the sides and bottom of a 9×13-inch glass or light-colored baking pan. Line the pan with parchment paper.  (I just spray pan with baking spray.)

2. In a medium bowl, whisk the flour, salt, and cocoa powder together.

3. Put the chocolate, butter and instant espresso powder in a large bowl and set it over a saucepan of simmering water, stirring occasionally, until the chocolate and butter are completely melted and smooth. Turn off the heat, but keep the bowl over the water and add the sugars. Whisk until completely combined, then remove the bowl from the pan. The mixture should be room temperature.

6. Pour the batter into the prepared pan and smooth the top. Bake in the center of the oven for 30 minutes, rotating the pan halfway through the baking time, until a toothpick inserted into the center of the brownies comes out with a few moist crumbs sticking to it. Let the brownies cool completely, then lift them out of the pan using the parchment paper. Cut into squares and serve.

7. Store at room temperature in an airtight container or wrap with plastic wrap for up to 3 days.